Interact with our solutions.

IT Services and Printing: Think the Network Is Safe? Check the Printers. 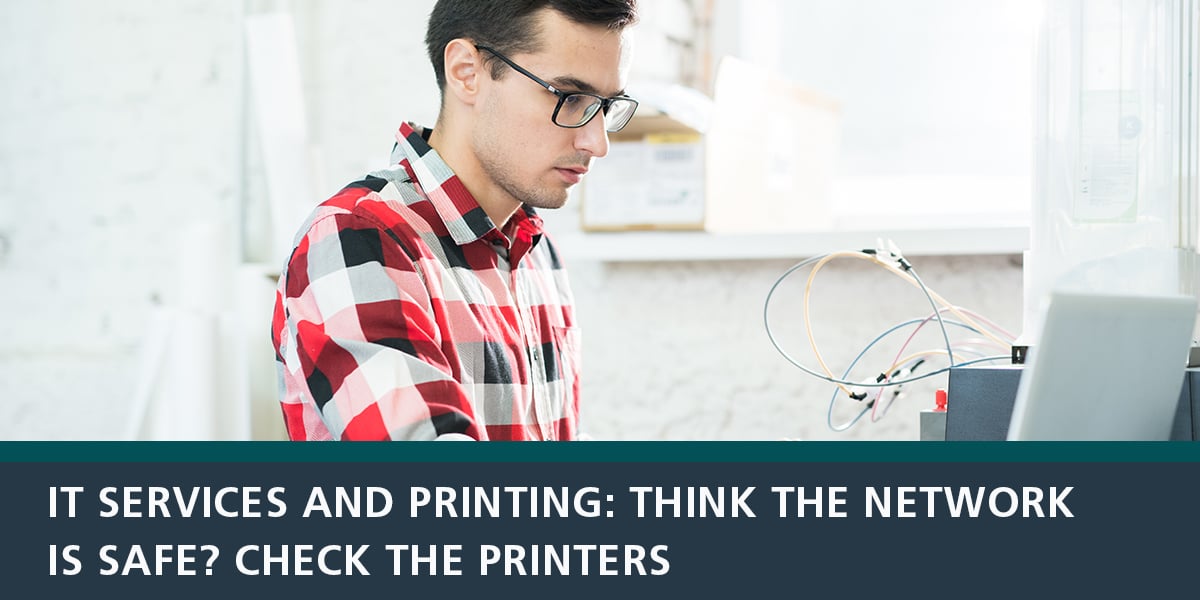 Digital technology is flooding the modern business environment, creating new opportunities for productivity and achievement, however, it also puts businesses in a vulnerable state for network attacks. In the ongoing struggle to protect IT environments from internet threats and malware, there is one endpoint that is often overlooked: the printers connected to the network. Believe it or not, IT services and printing are more connected than you think.

The shift towards this new digital reality is changing the way companies think about and deploy security. As features such as automated workflows, sharing services, and integrated project management tools become more common, a company’s technological infrastructure is more intertwined than ever.

Cybersecurity for 2019: It Involves More Than Computers and Servers

In today’s world, cybersecurity has been receiving a lot of attention due to several recent attacks. Hackers are always looking for an endpoint or way they can gain access to a company’s network which contains tons of sensitive information. Cybersecurity contends with a multi-faceted, dynamic landscape that includes far more than computers. All devices which access the internet through a company’s network now establish an endpoint.

The traditional perspective of securing endpoints – such as computers, routers, and mobile devices – leaves plenty of opportunities to overlook other web-connected devices in the office. As the Internet of Things (iOT) becomes more prevalent in the modern office, the scope of what a cybersecurity strategy must consider is only increasing. As modern offices rely more on digital tools to conduct business, it is becoming much harder to distinguish where cybersecurity ends, and another service begins.

Why Are Printers More Vulnerable Than Companies Realize?

When companies assess their security threats, they usually focus on computers and servers but overlook printers because their functionality seems too basic. Modern printers are sophisticated digital devices that come with much of the same hardware as computers. They include hard drives, central processing units (CPUs), a network adapter, and software that controls all of this hardware, known as firmware. Printers are essentially computers, but most people don’t think of it that way.

A recent survey by Spiceworks found that only 18% of IT professionals believed printers represent a security risk. Less than half had deployed any printer protection at all. Even then, only 16% of IT professionals implemented best practices such as security certificates to govern their printing protocols.

When left unsecured, printers create a backdoor into a company’s network – and hackers know this. For example, think of all the sensitive information a company printer has had previously in its queues. A hacker could access the printer’s internal hard drive and view all of those documents which contain confidential information. If queued documents are stored on a built-in hard drive or flash memory, the printer can keep copies of the documents even when the printer is turned off.

Shared printers allow a hacker or malware to move from the printer to company computers. The connectivity which enables users to do their jobs efficiently is turned against the organization when printers are not secured.

The Importance of IT in the Printing Infrastructure

IT plays a critical role in asset management and workflow processes. While managed print services may strategize the most efficient ways to accomplish a process, IT ultimately governs the way printing infrastructure fits within the company’s broader cybersecurity strategy. The most typical approaches to printer security display elements of both managed IT and managed printing services.

Both managed IT and managed print services deploy many of the same tactics but with different end goals in mind. These two services can work together to secure and optimize a print environment.

Most businesses spend a significant amount of money securing their network and servers, but continue to overlook their printers as a severe security risk. A printer is a vulnerable endpoint where cybercriminals can slip in and access a company’s network. With this in mind, it’s vital for businesses to make sure their printers have the latest security software installed, and that they stay up to date with how to keep devices as secure as possible to avoid security breaches in the future. Printers are typically not perceived as a severe security risk, but RJ Young wants to change that perception.

Are your printers secure? Let RJ Young help your business develop a thorough, secure, and efficient printer and network infrastructure. Contact RJ Young today to learn how they can help.

Interact with our modern office.
Check out our promo shop.
Resources
Our Company
Contact Us
Live Chat